Warning: "continue" targeting switch is equivalent to "break". Did you mean to use "continue 2"? in /home3/drnaddaf/en.drnadafkermani.com/wp-includes/pomo/plural-forms.php on line 210
 Blepharoplasty | Blepharoplasty Surgery

As aging, your face and appearance change. You look old with droopy or baggy eyelids. Most women want to look younger, so want to remove their problem and perform the eyelid surgery or blepharoplasty.

This article aims to consider the symptoms of aging in eyelids, suitable time for performing the surgery, before and after take cares.

Sagging around the eyes cause to look older. Blepharoplasty, is a procedure which removes the aging symptom of upper and lower eyelids. Blepharoplasty of upper eyelids is easier than the lower eyelids, so the surgeon should be skillful and have enough knowledge.  Dr. Nadaf helps you in decision making.

Symptoms of aging in upper eyelids

Indications of aging in upper eyelids

Symptoms of aging in lower eyelids

Indications of aging in lower eyelids 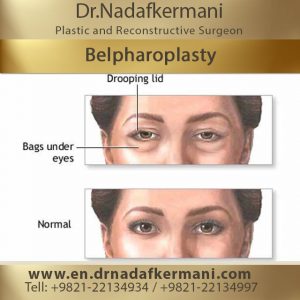 Blepharoplasty helps to remove the symptoms of aging in upper and lower eyelids. And is done to:

Removing excessive skin in upper eyelids, smoothes the skin and removes the sagging.

The patient may complain about the eyes dryness, sad appearance or inability in closing the eyes.

Removing the excessive fat is acceptable in lower eyelids, with existence of baggy eyes. High removing makes the appearance, unappealing.

The incisions will be recovered. And usually are not visible. The eyelids have the thinnest skin. In addition, the incisions create in the areas which can hide.

The best candidates are everyone who have aging symptoms in upper or lower eyelids. Dr. Nadafkermani ensures that, you are the suitable candidate of surgery during the consultation. The patient should be healthy and avoid smoking 2 weeks before the surgery.

The patient should inform his doctor some problems such as eye dryness or thyroid, because these problems can affect on the result of surgery.

Such as other surgeries, blepharoplasty has its own risks and complications. Dr. Nadaf explains these risks during the consultation.

Recovery after the surgery

The patient should rest at home and should avoid watching TV, studying or anything else that make pressure for eyes. To remove swelling or bruise, it’s better for patient to use many pillows to put the head up. The pain is so low. At the first day, the eyes are sensitive to sunshine, and so Dr. Nadafkermani recommends some drugs to remove the problem.

Many people express satisfaction with the results of blepharoplasty, such as youthful appearance and more self-confidence.