Warning: "continue" targeting switch is equivalent to "break". Did you mean to use "continue 2"? in /home3/drnaddaf/en.drnadafkermani.com/wp-includes/pomo/plural-forms.php on line 210
 Liposuction | Liposuction Surgery

Fat stores in different areas. But, in some areas, fat aggregation is so high and people are dissatisfied about their body and want remove their problems. Even though, doing heavy exercises can not reduce the fat, in this cases the only way, is using a surgery.

This article produces liposuction surgery, related take cares and everything you need.

Liposuction, which is known as lipoplasty, is one of the most common cosmetic surgery in Iran. Liposuction, removes the fat on your desired area, and shape your body.

Liposuction, removes the fatty tissues from the different parts of your body by using tiny cuts, which results in smooth appearance with minimal convalescence.

Having a suitable diet and doing exercise, can reduce the amount of fat, but there is high amount of fat aggregation in some areas which just remove by liposuction.

The fat stores in some areas. When you lose a weight or do exercises, your body lost the fat. In women, fat stores around the thigh, abdomen, back and flank. Flank and abdomen are the place of fat storage in men.

Liposuction is the best way to remove this problem, without weight loss. Liposuction, removes the fat, locally. 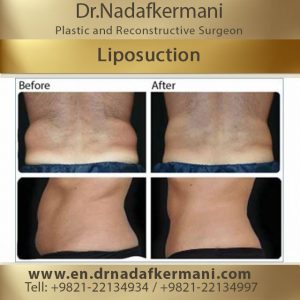 Dr. Nadaf, visits you and diagnoses that whether you are the suitable candidate to perform liposuction or not.

It should be consider that:

Cellulite, occurs near the skin surface. Liposuction is not performed near the surface, so has many risks.

Performing liposuction is a difficult surgery. Having enough ability, is one of the most important factor in a successful surgery.

Improved technique, makes the liposuction safe with less pain. These techniques are as following:

In this technique, the combination of serum and some drugs, is injected into the fatty tissues. Which aims to:

This technique, liquate the fat before removing them. Laser, aggregates the skin due to creating the heat.

Convalescence after the liposuction

First visit, is 1 week after the liposuction. This surgery also has its own risks and complication.

Dr. Nadaf, informs you about all these risks.

So, liposuction shape your body by removing the excessive fatty tissues. During the liposuction, skillful surgeon place the incisions in areas which are not visible. The incisions improve soon and combine with the skin.  Liposuction is done under the general anesthetic along with sedatives.